Phaeochromocytomas are benign (non-cancerous) in around 90% of people. They usually occur by chance, but in some cases there is a genetic reason for their occurrence, and they can affect more than one family member. This is often as a recognised syndrome, the commonest of which is in MEN-2.

Specialised urine tests are used to diagnose phaeochromocytomas, and CT or MRI scans can be done to see which adrenal gland is affected. Commonly, a specialised scan called an MIBG scan is also needed. Specific blood pressure tablets, most commonly a drug called doxazosin, are used to help control blood pressure before surgery to remove the tumour.

People with a phaeochromocytoma have a higher chance of suffering from a heart attack, stroke, or dying suddenly from no apparent cause, than people who do not have this problem. Surgery to remove these tumours is therefore advised if they are identified. This can usually be performed with a laparoscopic (minimally invasive) approach. 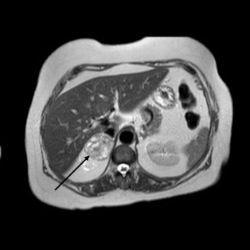